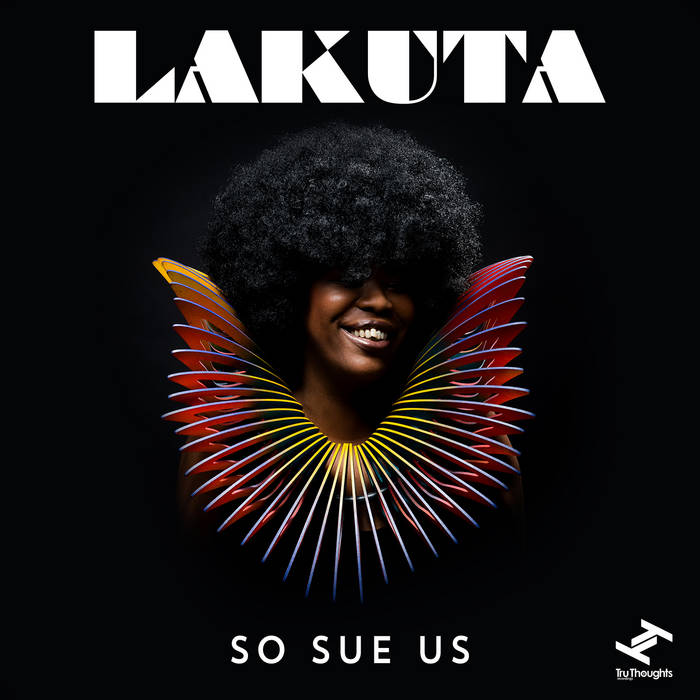 “Infectiously danceable bed of sound: a frivolous, uplifting spirit and a steely core.” – THE GUARDIAN | “Promising new band.” – FIP | “Lakuta sets out its stall with passion and energy.” – THE INDEPENDENT | “One of the great things about this tune is every time you listen to it you just love it a little bit more” – JULIE ADENUGA (BEATS 1, APPLE MUSIC) |“Amazing Afrobeat-influenced sound.” – LAUREN LAVERNE (BBC 6MUSIC) | “Love it!" – ROB DA BANK | “I’ve been very impressed with what I’ve heard so far from this Brighton collective” – CRAIG CHARLES (BBC 6MUSIC)

The “So Sue Us” EP is the latest offering of rhythmic house-laced grooves and sweltering Afro-soul from the hotly-tipped Lakuta to be released on Tru Thoughts. This 8-track EP highlights the playful “So Sue Us” from their debut album ‘Brothers & Sisters’ alongside a collection of new remixes from Origin One, Contours, Ratomagoson, Polyop, Sanjiao, Mangataot and Junction 13.

Kicking off the EP, “So Sue Us” is a playful commentary on attitudes which exist within today’s commercial music sector. Retaining the Afrobeat influences, Nottingham-based Origin One’s remix of the title track was influenced by Kuduro dance music; layering effect-smothered vocals and an energetic rhythm section on a house-tip. Origin One has been supported by David Rodigan (BBC 1Xtra),and produced “Meant To Be” on Harleighblu X Starkiller’s latest project under his Azure alias.

Accomplished drummer and producer Contours’ remix of “Pique” takes inspiration from the loose, rhythmic drumming of the original. Adding his own cosmic synths, Afro-jazz and breakbeat rhythms he explains: “I was keen to create something in this time signature that would translate well to a dancefloor and a club environment”. This Mancunian producer has so far unleashed his beat-laden exploits with the Rhythm Section International family to find favour with RA, Dummy Mag, STW, and recently finished off a number of exciting remixes that will be released this year.

Producer Junction 13 (aka Maschine Man Tim) brings out the soulful elements of “Lose Yourself” in his remix. Producing the whole track on Maschine, he chops up cool guitar, horn and Rhodes sounds to add a dancefloor element. Junction 13 has won accolades from Annie Nightingale, Simon Dunmore and DJ SKT; a forthcoming release on Defected Records sister label, and a collaboration with Wädé and Belgium-based house act Gavin Francis in the works.

Fresh and full of optimism, South London’s Polyop crafts a hypnotic Afro-disco remix of “Mr Serious”. Working from an organic soundboard of samples created from field recordings, he adds an arpeggiator to create complex polyrhythms and syncopation. Supporters of his work include: BBC Introducing, Roy Davis Jr. and Bill Brewster. Next up, Sanjiao’s remix of “Mr Serious” layers a UK funky sound with notes of tropical heat, and a special electronic dancefloor groove to create the ideal track for the day parties of the Australian producer’s motherland.

Label alumni Mangataot returns with a dub and tabla-heavy remix of the afro-centric “Fear Go Running”. After watching a live performance of Lakuta he was inspired to recreate their ardour by focusing on the driving energy of the track. Samples of crowds capture live motifs, whilst the tabla drums are used to ignite a dialogue between the rhythm and the brass sections. Closing the EP, Ratomagoson applies a raw and stripped down four-to-the-floor beat, and vocal echoes in “Lose Yourself” to add an air of mystery to the remix. Ratomagoson is currently taking part in the Future Bubblers project – a talent discovery and development idea co-ordinated by Gilles Peterson and Brownswood Recordings.

Immersing themselves in their musical and multi-cultural heritages, the Brighton-based collective have roots that run through Kenya, Tanzania, Ghana, Malaysia,and Europe. The name Lakuta originates from vocalist Siggi's mother tongue and translates from Swahili to mean ‘to find, meet and share’. Referencing a fusion of musical styles, Lakuta draw on their funk, soul and world music backgrounds to unearth a conversation that explores modern and traditional approaches.

Lakuta are a musical collective founded by Cicely Taylor in Brighton. The British-based band have heritage from Kenya, Tanzania, Ghana, Malaysia, Spain and the UK.

Bandcamp Daily  your guide to the world of Bandcamp