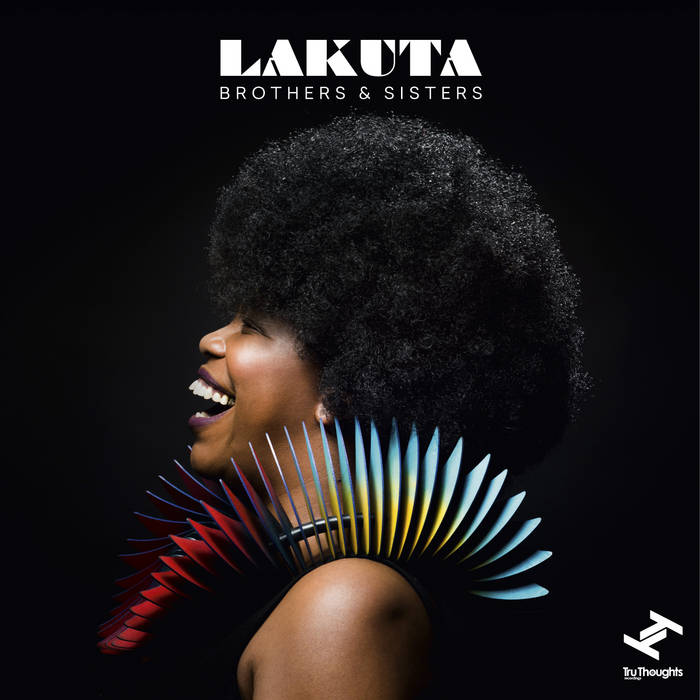 Out 12th August, ‘Brothers & Sisters’ is the debut album from Tru Thoughts’ new signing Lakuta. Building on the success of their first single “Bata Boy” (out 1st July), which attracted a clamour of support from Basement Jaxx’s Felix Buxton, Bobbito & Laurent Garnier, the ensemble’s new tropical album is produced by the respected Nick Faber.

Cicely explains “It’s about feeling a sense of unity between humanity – there’s no time for division, we have to work together and realise that we are all descended from the same place and need to treat each other as brothers and sisters.” - “And of course, just make beautiful, beautiful music” Siggi says passionately.

Immersing themselves in their musical and multi-cultural heritages, the Brighton-based collective have roots that run through Kenya, Tanzania, Ghana, Malaysia, and Europe. The name Lakuta originates from Siggi's mother tongue and translates from Swahili to mean ‘to find, meet and share’. Referencing a fusion of musical styles, Lakuta draw on their funk, soul and world music backgrounds to unearth a conversation that explores modern and traditional approaches.

Nick Faber’s production identifies with the band’s authentic afrobeat sound, switching up the groove to unlock the infectious energy which radiates from Lakuta’s live performances. Faber learnt his trade at Beatles-producer George Martin's AIR Studios and has remixed for artists including Kylie Minogue & the Sugababes; written and produced for John Turrell; and soundtracked Ice T’s hip hop documentary “Something For Nothing: The Art Of Rap”.

The percussive and dancefloor-centric lead track “Bata Boy” opens the album with the distinctive tone of the Cuban batá trio playing the ‘Chachalokefun’ rhythm. As Siggi’s rich vocals call out against sexual prejudice, the songs righteous undertones are amplified by the brilliant horn hook. The cleverly named “Rice & Peace” harnesses a similar passion for movement built up by a furore of shakers. The funky 4-note riff of the electric guitar creates a hypnotic cycle, similar to the high energy of Congolese Soukous music drawing you deeper into its groove. “The track’s about living life on time that’s borrowed” Cicely explains. “It’s about a struggle between poverty and parenthood”.

“So Sue Us” is a playful commentary on attitudes which exist within today’s commercial music sector. Transporting the album to a math rock dimension, “Pique” was inspired by an Egyptian 10/8 rhythm; the track then shifts between 5/4, 6/8 and 4/4 time signatures with unpredictable breaks which allows dancers to catch their breath. Led by a tui tui rhythm the dreamy “Yansan” is based on the warrior aspect of the Yoruba goddess of winds, violent storms, death & rebirth. “There’s a pantheon of different Orishas (Yoruba deities)” Cicely explains “I’m particularly interested in the matriarchal lineage because it turns Christian definitions of what it means to be a women on its head”.

Warm Spanish guitars and the kora (West African harp) open “Changanya” and give the rhythm a fusion feel, like a Cuban Son with a swirling Flamenco tempo. The lyrics are both a plea and a championing of a more open-minded attitude to culture and tradition, referencing the creativity that is emerging globally in fusing folk traditions with modern music. “Lose Yourself” is a tight funk number with overtones of acid-jazz and Brazilian MPB, highlighting the conga and pandeiro drums and embracing a wide range of percussion. Soaring high, Siggi’s soulful notes belt out with a heart-filled power and captivating dynamism akin to the divas and gospel singers she grew up listening to.

The light-hearted “Mr Serious” leads on in high spirits with the playful notes of a balafon and mbira, featuring positive, uplifting lyrics backed by a highlife rhythm. Stepping up the pace, the penultimate track “Fear Go Running” has the velocity of a Shangaan Electro afro-futurist banger. Bringing the album to a close “Ultimate Robot” is a sax-heavy number written about a flirtatious encounter which is made all the more enticing by Siggi’s cool, whispering vocals.

In the lead up to the release of their debut album, ‘Brothers & Sisters’, Lakuta have been readying themselves for a busy summer playing gigs and festivals (see overleaf) and they have some exciting music videos coming soon. After a mesmerising performance at The Great Escape, Lakuta are set to shake stages at venues and festivals across the UK as a full 9-piece band, a live DJ set or in a stripped back acoustic outfit. “Brothers and sisters are what we are, musically and spiritually” Siggi declares, “This album is our offering to the brothers and sisters with whom we share this planet.”

Lakuta are a musical collective founded by Cicely Taylor in Brighton. The British-based band have heritage from Kenya, Tanzania, Ghana, Malaysia, Spain and the UK.

Bandcamp Daily  your guide to the world of Bandcamp